Vodafone Foundation continued its response to the European refugee crisis by deploying a team of four volunteers to Kara Tepe refugee camp in October. Kara Tepe is situated on the east coast of the Greek island of Lesvos. There are now two camps in Kara Tepe: the “old” camp which houses 850 refugees in static metal containers, and the 'new, temporary' camp situated on the beach which houses 7,500 refugees in tents and makeshift shelters. The 'new, temporary' Kara Tepe was created as an emergency solution after Moria camp burnt down in September and immediate re-settlement was needed. Currently, utility networks are not available in this temporary camp.  Most of the people hosted here are from Afghanistan, Syria, Iraq, DRC, Somalia and other African countries.

Before leaving for Kara Tepe we had a solid plan to install Wi-Fi and provide internet connectivity to residents in the 'old' camp. The old Kara Tepe accommodates the most vulnerable populations who were moved from Moria camp such as seniors, people with disabilities, families with children and people with health issues. After the first few days on the ground we were able to install seven access points that gave coverage to the main areas in camp including the medical and education facilities, most housing shelters and the quarantine area for COVID-19. This connectivity is now accessible 24 hours a day, a vast improvement on that which already existed – firstly, the previous Wi-Fi was intermittent due to power issues, but also only reliably covered the laundry centre and not many shelters nearby. Vodafone Foundation's new Instant Network now allows people to connect from all the main camp hubs as well as their homes. 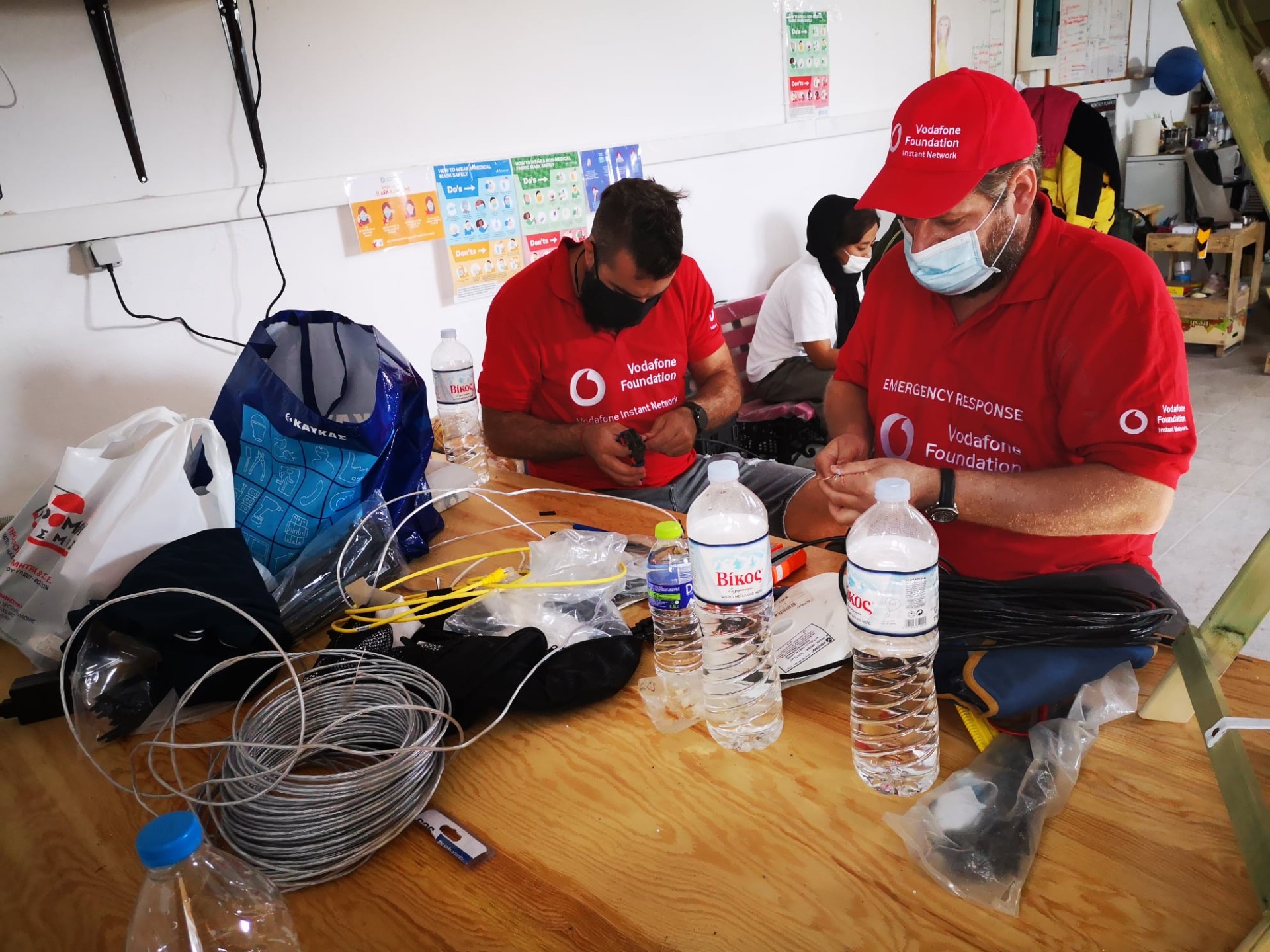 We spoke to Walid and his wife Haura who arrived on Lesvos from Iraq. The couple have a six-month-old baby and could not afford a SIM card with data, but also could not travel to the laundry centre for Wi-Fi because of concerns for their young child. After our deployment, Walid and Haura now have Wi-Fi in their home provided by a Vodafone Foundation access point. They can now safely video call and WhatsApp message from their home rather than leave for the other side of the camp. Walid and Haura have aspirations to move to central Europe and begin a new life in Germany.

This story is all too common in camp. We spoke to a young girl who had been in Kara Tepe for two years after fleeing from Iraq. She hopes to join her uncles in Germany but feels disdain at the long and drawn out process of seeking asylum. By providing reliable Wi-Fi coverage, however, people in camp can access education and quality information, follow up with their legal case by staying in contact with relevant authorities and contact loved ones abroad.

On return home, the Vodafone Foundation team conducted analysis which shows our Wi-Fi network is performing well. At one point we saw an average of 1 GB of data transferred per user per day, which is huge!

Internet connectivity is something we mostly take for granted back home and it's situations like these that emphasise the importance of communications in crisis scenarios and the valuable role that Vodafone Foundation can play. Whilst we work hard to keep those in our own countries connected, it’s great to know Vodafone Foundation connects the most vulnerable no matter where they are.

Find out more about our work to keep everyone.connected.